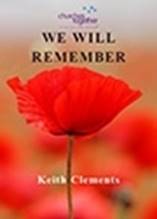 WE WILL REMEMBER
By Keith Clements

Much will be said about the First World War during this time of commemoration. For Christians particularly it will be a time for reflection on how the churches 100 years ago responded to the crisis of war and the immensity of suffering that it unleashed, and on what this may still have to teach us as faith struggles with the issues of a violent world today.

We Will Remember is a collection of voices from the First World War and its aftermath, showing how faith faced up to the shock of international conflict, the moral issues of patriotism and obedience to God, of suffering and grief, of enmity and forgiveness, of the choices between bearing arms and pacifism, and of how far the churches were able to remain faithful to their calling as members of the one, worldwide body of Christ when their nations were at war with each other.

Some of the voices are from already familiar figures, whether preachers, poets, soldiers, writers, theologians or peace campaigners. But many others are heard for the first time, and there are some surprises, contradicting easy generalisations about how churches and their leaders behaved. German and Indian voices are heard too. At the end of each chapter suggestions are made for biblical meditation, and questions and themes offered for study either individually or in groups.

“Let us have the courage to face the truth. It is not particular nations or classes or statesmen who are the makers of war; it is not the Kings or Emperors, it is not militarists, it is not the scare-makers or the Press; it is you and I. They are the puppets of destiny, we are the creators of destiny.”
(Eglantyne Jebb, 1915)

We Will Remember is published as an Ebook by Churches Together in Britain and Ireland (CTBI) and can be downloaded FREE from the CTBI website http://www.ctbi.org.uk – go to “world war 1 centenary”.